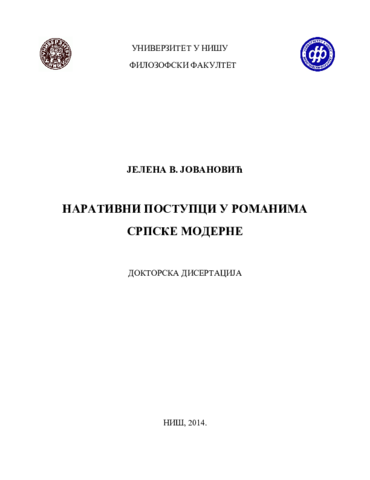 Doctoral thesis Narrative Strategies in the Serbian Modernist Novels focuses on the extrication and description of narrative procedures’ functionality in the Serbian modernist novels published from the beginning of the 20th century till the beginning of the Great War. The corpus of the study consists of the novels by Borisav Stаnković (Nečista krv, Gazda Mladen), Svetozar Ćorović (Majčina sultanija,Jarani), Ivo Ćipiko (Za kruhom, Pauci), Jelena Dimitrijević (Nove), Lazar Komarčić (Jedna ugašena zvezda, Jedan razoren um), Pera Stefanović Taletov (Novac), Veljko Milićević (Bespuće, Opsene), Milutin Uskoković (Došljaci, Čedomir Ilić). The basic methodological guidelines are represented through the classical, but also postclassical, primarily cognitive narratological studies in the thesis. Bearing in mind the vast field of narratological research that includes all instances of narrative communicative chain and within it various ,,narrative procedures”, the focus of the research is based on the problem of focalization and the frame issue. The theoretical part of the thesis is based on the theories of focalization and frames from its earliest definitions to their redefinition and understandimg in the latest narratological studies. In separate analyses, the thesis deals with the issue of focalization, particularly the internal focalization which is dominant in the Serbian modernist novel, thus also including intermental/collective and hypothetical focalization. The second analytical-interpretative part of the thesis deals with the issue of border framing and includes titles, intertitles, epigraphs, incipits and explicits. The analyses have pointed to the conclusion of the destabilization of mimetics expressed in the procedure of interiorization. Internal focalization as a key narrative strategy of modernist novel (also present in border framings) conditioned other movements such as: expressed procedure of individualization in the process of literary character's building, specific thematicmotive register, diminshed level of narrative; decomposition of epic narration by poetization of expression and interpolation of discursive segments; domination of thought report, direct and indirect inner monologue; metaforization and symbolization of descriptions; infringing perceptibility and authority of narrator, diminished visibility of narattee, interiorization of time and space, expansion of nonactualized narratives.