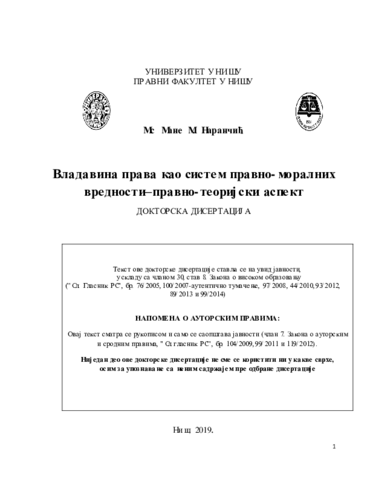 In this doctoral dissertation inital base and moral meaning therule oflaw is explained. Base idea in this work that appears is fact that therule oflaw is variabl issue. However, with this fact can be explained his transformation, but not to the improvement the rule of law as result.This was lead to his end in ethical, the rule of laws and ideas meaning.This end can be visible at least in the leading west countries, although there are also countries without insufficient elementary levelthe rule of law. Purpose of this investigation is to show development the ruleof law through mode of moral values and transformation. Considering that morality has appeared differently during history and according to leading classes, values had something over estimated.Moral has always some value that allow every individual to choose between good and wrong.His valuability can be viewed in fact that moral acceptance distinguished people‘s life from troubles and shows human as creative to environment and other humans.Moral is defined as determined behavior, practice and wellbeing useful for society.In morals conscience individuals are based on certain autonomy caused by personal responsibility for their acts in society and environment.This ''need to'' had two opposite contents: one that coming from acceptance of existing system of social of society and second that is tuned to personal searching for condition and content of life (Životić Miladin). From this correlation is provided one of interactive relation called respect to other.Can‘t noted that human is not only tool for other humsns even a goal.He was found a key of moral in the meaning of responsibility and this itself is a manner of respect of morals law.In the base of the moral we can found need for our responsibility as a condition for acting. Moral as a conformed system society has a constant discrepancy between society norms and personal conscience. Based on the research of morals conscience throughethis theory can be found base of moral as a highest goods. Ethic of highest goods determines key of moral as a intention of happy (eudajmonizam) as performing leading to consensus personal interests with common (utilitarian), as duty conscience ( Cant‘s ethic), as personal development ( perfection). All contradictions of ethic highest good solves deontologic ethis. This can be based on fact that highest principle of morals life ''righteousness'' and ''meaning of rationality''. Theoretic contribution of this work can contains in explanation of the metamorphosis and transformation of law through morals dimensionthe rule of law and accioms approach of finding initial forms.Practical work will be done by showing causes, mechanism and measure of degrading of postulate of protection and law as such as freedom of all peoples through humanistic and liberty ideas in the society.Personal happiness has a significant values, but if this is underlined for common society and country liberty then this are coming more important, because sometimes can not be obtained.In the moral ‘s category can be found: morals court, procedure, conscience, obligation, rule of value and hierarchy of value.Based on those categories, following dividing to two base groups can be found: subjective (sense of duty) and objective where individual found that value was not defined only from recognition or not recognition (good-bad, should be-not should be, right-not right) and we can said that base of moral is not religion but humanity, i. e. knowledge about human and his nature.Good in the humans life did not came outside, it is already in the human nature.

This work is licensed under a
CC BY-NC-ND 2.0 AT - Creative Commons Attribution - Non-Commercial - No Derivative Works 2.0 Austria License.