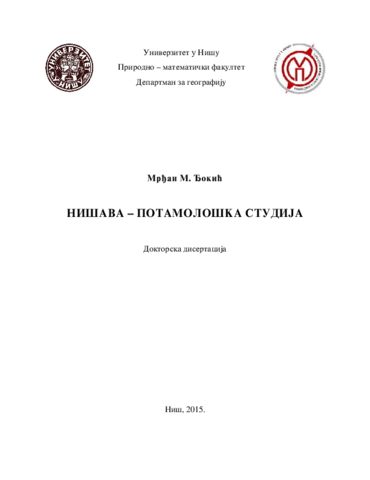 The Nišava River Basin is very multiform and specific as in geographical, so as in hydrological terms, which is conditioned by its particular location on the contact of the Serbian-Macedonian Mass and the Carpatho-Balkan Mountains, extremely complex geological structure and tectonics, diverse climatic conditions. The main objective of this paper is to analyse the hydrological conditions in the Nišava River Basin, that is, the factors that affect the formation of waters. This was achieved through determination of the degree of influence of certain physical-geographical factors on the type of spring, way of precipitation runoff and water regime of the Nišava River and its tributaries. The aim was also to determine trends of changes in the value of the climate elements that had a crucial impact on the discharge formation in watercourses - temperature and precipitation, as well as to determine the probability of occurrence of the characteristical water levels and discharges for better water management planning and water use. One of the main objectives was to determine the probability of occurrence of extreme discharges in order to prevent flooding and droughts, as well as the level of anthropogenic impacts on the discharges of certain parts of the Nišava River Basin, both in quantitative terms, but also in time and space discharge distribution. The paper applied mostly the cartographical, graphical, and above all, mathematical and statistical methods. It was found that the dissection and complexity of the relief forms in the basin conditioned a huge distinction in the exposition and elevation of the terrain, which were the two main factors that had a strong impact on the discharge formation. The exsistance of a trend of increase in annual air temperatures was determined, especially during the summer months, which negatively reflected on the discharge. Also, a trend of decrease in precipitation amount in the basin was determined. As a consequence, the trend of decrease in discharge was found. The distinctive anthropogenic impacts on the formation and runoff of the watercourses in the Nišava River Basin were established, which reflected through water taking from the riverbed from one and transferring to the riverbeds of the other watercourses which were located both in the Nišava River Basin and also out of it, through water supply of the numerous inhabitants and industies, uncontrolled and unregulated unregulated agricultural irrigation, which might lead to decrease in the water amount in the riverbed, especially during the periods of droughts as well as with the associated problems.

This work is licensed under a
CC BY-NC-ND 2.0 AT - Creative Commons Attribution - Non-Commercial - No Derivative Works 2.0 Austria License.